2021 Ford Ranger Tremor Isn’t a Raptor, But You Should Still Care 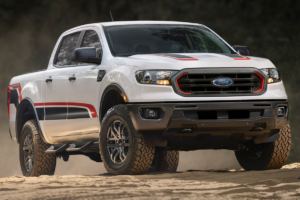 A couple of months after Ford announced its factory-backed off-road kit for the Ranger, the Blue Oval is giving fans of its mid-size pickup yet another off-road option. Ford says the new Tremor package is the “most off-road-ready factory-built Ranger ever offered in the U.S.” If or when the anticipated Ranger Raptor—smaller sibling to the larger F-150 Raptor—ever makes it to our shores, expect it to take over that claim, but for now, Raptorless Americans, this is the best the Ranger gets.

The Ranger Tremor is suspended by a set of Fox 2.0 monotube shocks that come with external reservoirs for better cooling and a specially tuned set of front coil springs and rear leaf springs. The Tremor rides on a set of 17-inch black wheels that are wrapped in 32-inch tall Continental General Grabber all-terrain tires. Put all that kit together and the Ranger Tremor has 9.7 inches of ground clearance. That’s still some ways off the likes of the Jeep Gladiator, which offers 10.0 inches of ground clearance on even its base trim. 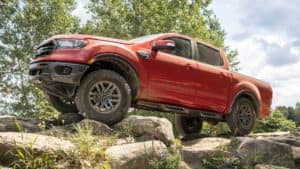 That said, the Ranger Tremor provides an extra 6.5 inches of extra suspension travel up front and an extra 8.1 inches of wiggle room at the rear relative to its base counterpart. Approach and departure angles measure in at 30.9 and 25.5 degrees, respectively. For reference, a base Gladiator has an approach angle of 40.8 degrees and a departure angle of 25.0 degrees.

Ford notes the Tremor kit maintains the Ranger’s payload and towing numbers of 1,430 and 7,500 pounds. The Ranger Tremor also benefits from six auxiliary switches in the cabin that can be hooked up to accessories like exterior lights, an air compressor, or a winch.

There are also Tremor-specific styling cues: a blacked-out version of the Ranger Lariat’s grille with some red accenting and Tremor decals on the rear three-quarter panels (Tremor is also stitched on to the seats). Additionally, Tremor buyers can opt for a decal package that adds extra panache to the truck’s sills and hood.

0 comment(s) so far on 2021 Ford Ranger Tremor Isn’t a Raptor, But You Should Still Care